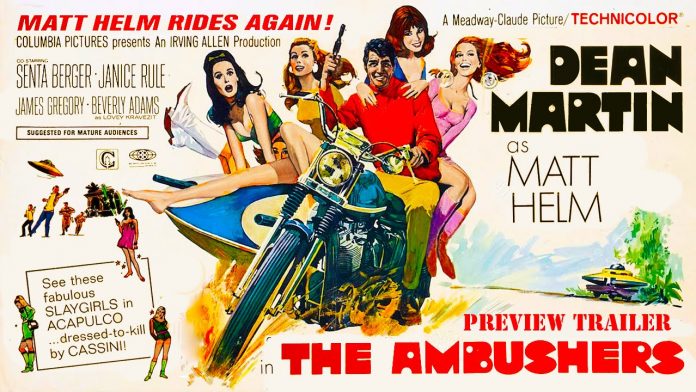 If Austin Powers had a favourite movie spy series it would have to be the Matt Helm movies made by Dean Martin in the 1960s. Matt was a hard-as-nails U.S. government counter-agent, hero of 27 books by Donald Hamilton. Dino played him as a lecherous, chain-smoking, permanently pickled lounge lizard who gets more crumpet than Greggs. Columbia Pictures originally planned at least five Matt Helm movies, starting with The Silencers (1966), where our hero is joined by sexy Stella Stevens on a booze-fuelled mission to prevent a baddie named The Big O (played by Batman villain Victor Buono) from creating a nuclear disaster.

Dino’s Helm is so laid back that even if a nuclear bomb went of behind him he wouldn’t drop his martini glass. He has a sexy secretary named Lovey Kravesit and a small harem of stunning ‘Slaymates’ ever ready to soap his back in his king-sized tub. He’s armed with a special gun that shoots backwards, a blade-firing camera and exploding buttons. This permanently sozzled superspy also has a fully stocked bar in his wood paneled station wagon so that he can get tanked up as he drives. Hey, it was the 60s, get over it and have one for the road.

Martin was 50 years old when he made his first Matt Helm flick and while he manages to bed every sexy woman he meets he’s not so energetic in the action scenes, But there aren’t that many of them here anyway. The critics hated this movie but Dino had the last laugh, it made a fortune at the box office and he ended up with a bigger payday than Sean Connery got from playing James Bond in the same year’s Thunderball!

Martin was back as Helm the very same year in Murderers Row (1966). The film was supposed to have been released in 1967 but Columbia’s big Christmas release, Casino Royale, was mired in production problems so the Helm pic took its place as a Yuletide treat. This second movie in the series saw our lackadaisical hero bedding sexy Ann-Margret and trying to stop her evil dad Karl Malden (who changes his accent in every scene) from melting Washington DC with his “helio-beam.” Dino didn’t exactly knock himself out making this one. He refused to travel for Europe to do any location filming, and therefore a good proportion of the movie involves the use of an unconvincing double!

Murderer’s Row took a tip from James Bond’s You Only Live Twice and opened with Dino supposedly being murdered in his bathtub, leading to an amusing scene where his countless girlfriends all turn up to his funeral in the same outfits. The fashions here are 60s kitsch at its craziest, and again Dino is obviously just playing himself, making jokes about fellow rat-packer Frank Sinatra and knocking back whisky on the rocks as he drives. The film features a bad musical number from the pop group ‘Dino, Desi & Billy’. One member is Dean Martin’s son, and we know this because he calls out “Hi Dad!”

The gadgets here include a gun with a delayed action, so that when a baddie uses it and it doesn’t go off they inevitably look down the barrel and… that’s their lot. Cunning.

The Ambushers came next in 1967, with more off-colour jokes, scantily-clad females and plenty of lovable sexism from Dino. Meeting one well-endowed female secret agent Helm comments: “When you say you’re a ‘38’ you ain’t just kidding.”

“It’s not a gun, Mr. Helm,” she replies. “It’s the new weapon they gave me, developed right here in our labs.”

“Developed pretty well, too!” says our man with a wink to camera.

The plot of this one had Dino traveling to Mexico to retrieve a flying saucer stolen by a rogue beer manufacturer! At one point the baddies try to kill Helm by chucking him into a huge vat of ale. How daft is that? The guy who has been thrown in with him glugs frantically that he can’t swim, and Dino coolly advises him: “Drink your way to the bottom.”

Amazingly The Ambushers made a big profit at the box office and so the Helm bandwagon rolled on with The Wrecking Crew (1969). This time our hard-drinking hero linked up with sexy Sharon Tate (a tragic victim of the Manson murders only a few months after this hit cinemas) to save the world’s economy from the meltdown that seems imminent when dastardly crime baron Nigel Green hijacks $1 billion in gold.

Chuck Norris turns up in a small role and Columbia hired Bruce Lee to train Sharon for her kung fu fight with sexy Nancy Kwan – the undoubted highlight of the film. Otherwise it’s all extremely lame, with very tacky production values – at one point Dino lands on a lawn and it bounces!

While The Wrecking Crew was utter rubbish it was not much worse than previous entries, and the only reason it became the final entry in the series was because Dean Martin himself decided to call it a day.

It is believed that he was so distraught over the murder of his Wrecking Crew co-star and friend Sharon Tate that he abandoned the next already-announced Matt Helm motion picture series installment (to be titled The Ravagers), and never played the character again, though there was a short-lived TV series in the 70s starring Anthony Franciosa in the part.

If you’re a fan of Dino himself or maybe just of really trashy 60s spy flicks with swinging chicks and groovy tunes then you’ll probably get a kick out of the Matt Helm movies despite their ineptitude. All four movies are available as a box set from Amazon. Pour yourself a large martini and enjoy.