The day that the first issue of Infinity goes on sale is also the day that Sci-Fi London takes place. Check out the details here!

The SCI-FI-LONDON FILM FESTIVAL 2017 has launched its astronomical 17th annual programme which will run from the 27th April until the 6th May 2017 across London with ten days of amazing film, live music, immersive experiences and more. It will showcase a fantastic lineup with 6 world film premieres, 13 UK film premieres, 11 world short premieres and 13 UK short premieres. It will host 25 features, 51 shorts and 4 VR shorts alongside its regular classic cult events such as the 48 HOUR FILM CHALLENGE and SCI-FIDO, the world’s only cosplay for dogs!

Opening this year’s festival on the 27th April at the Rich Mix is the UK Premiere of CAUGHT– a film that returns us to the great days of British Science fiction, directed by Jamie Patterson (Fractured), written and produced by Alex Francis (Moon) and starring April Pearson, Mickey Sumner and Cian Berry. It’s the story of a ‘work-from-home’ journalist couple who invite a man and woman, called Mr & Mrs Blair, into their idyllic village home. But what begins with an informal interview descends into a nightmarish fight for survival.

The festival’s Closing Night on the 6th May at Stratford Picturehouse is the World Premiere of THE RIZEN directed by Matt Mitchell and Taliesyn Mitchell and starring Lee Latchford-Evans, Laura Swift, Tom Goodman-Hill, Adrian Edmondson and Sally Phillips. The year is 1955. NATO and the Allied Forces have been conducting secret, occult experiments in a bid to win the Arms Race. Now, they have finally succeeded but what the Army has unleashed threatens to tear our world apart. One woman must lead the only survivors past horrors that the military has no way to control – and fight to close what should never have been opened.

This year we’ve teamed up with the Science Museum and their fantastic blockbuster Robots exhibition, to present a movie double-bill focusing on the world of artificial intelligence with A.I. AND EX MACHINA.

Special events don’t stop there. Screenwriter Darren Rapier and SCI-FI-LONDON’s Louis Savy will be hosting a Sci-fi SCREENWRITING WORKSHOP: ROBOTS & ROCKETS at the BFI on Sunday 30th April 10.30am. It will take you through the process of creating a low-budget sci-fi screenplay, and provide a practical guide on how to choose the best ideas, then work them into a pitch, synopsis and script.

The festival will host electronic live music event from the future with KRAUTWERK at London’s Moth Club and Ramsgate Music Hall on the 5thand 6th May. SCI-FI-LONDON in association with PsychFI, Bad Vibrations and Snap Crackle & Pop are delighted to bring together one of the most exciting music collaborations in recent years. For the first time, Eberhard Kranemann (Piss Off, Kraftwerk, Neu) and Harald Grosskopf(Synthesist, Ash Ra Tempel, Klaus Shulze) will transmit live their cosmic sonic visions of TODAY, TOMORROW & BEYOND.

SCI-FIDO – THE WORLD’S ONLY COSPLAY FOR DOGS EVENT returns again this year on Sat 29th April at Juju’s Bar, The Old Truman Brewery in association with ALL DOGS MATTER for the Crufts of Science fiction! Do you have a four-legged friend who likes to dress up as a sci-fi character? Or a pooch that looks like Princess Leia? Bring them along to our ‘dressed-up dog’ photo session!

R.I.S.E – A DYSTOPIAN VR EXPERIENCE will play out on Mon 1st May catering for our trumpocalyptic and brexited, post post-modern lives. Maybe the robots should rule?!  But what if the malaise gets to them too? Who wants to work to survive when we have such wonderful technology at our fingertips? SCI-FI-LONDON and PsychFI have produced an immersive experience in VR to give you a taste of how our robot friends cope with their utopia. Developed by leading VR house, beLoudest, the experience will be available on IoS and Android for all good smartphones and will work in your lovely Google Cardboard or headset of choice.

Augmented, virtual, enhanced, trans or multimedia – it’s ‘mixed up’.  A few brands have led the way – adding a VR thing here, an AR thing there – but does it really make any difference and does this usual corporate approach get to the audience in a way that makes them care? #HACKSTOCK: BEYOND 2017 on the 5th and 6th May at The Trampery in Old St is our answer – bringing creators, makers, disrupters, artists, musicians, hackers, developers and you together in one place to talk it, think it, do it and play with it. And it’s Free! We have every flavour of headset – from cardboard to HoloLens and a myriad of other toys to play with. Our discussions are around the Talkaoke table. It’s informal, organic and not as arsey as this sounds! Like looking at the ocean, you think you know all about it… but underneath the surface there is a whole ecosystem we have hardly explored.

Other major Film Premiere Galas this year include the UK Premiere of BLUE WORLD ORDER directed by Ché Baker and Dallas Bland, starring Billy Zane, Stephen Hunter, Bruce Spence, Jack Thompson. The film is set in a post-apocalyptic world in which civilisation has crumbled. A massive electromagnetic pulse has killed all children on the planet, with the exception of Molly (Billie Rutherford), the daughter of Jake Slater (Jake Ryan). Mad Max meets Star Wars? With a car chase in the desert by 7 DeLoreans this will hopefully be a reference for other films of the future.

Celebrating its World Premiere, FLORA is a brilliant début for director Sasha Louis Vukovic, whose excellent cast deliver a refreshing take on the ‘monster-in-the-woods’ canon. Set in the spring of 1929 near the end of a golden age of exploration, an expedition of Ivy League University Botanists enter an uncharted forest on the North American frontier. Tasked to study the native flora, the students unearth a deadly organism and are soon in a fight with nature itself.

NEIL STRYKER AND THE TYRANT OF TIME Directed by Rob Taylor and starring David Ogden Stiers, Rob Taylor and Walter Koenig, this is a cult film in the making. Set in a future time, Neil Stryker is a hardened Elite Forces agent famous for hunting and capturing his former mentor and villainous time-traveller, ‘The Mad Scientist’. Following a magnificent escape, the Mad Scientist rains down chaos on the city in a quest for revenge. Stryker must now race through time and do battle with goblins, robots, and ten-foot killer penguins in order to save the world and rescue his son from the clutches of his infamous former mentor. This sci-fi/comedy feature is a 1980s throwback where every set, every effect, every puppet was crafted by dedicated artists, some of whom might get time off for good behaviour!

Other World Premieres include YESTERDAY LAST YEAR directed by Jeff Hanley and written by Adam Bradley, this is a brilliant debut on time travel with lots of loopholes and paradoxes. SUBLIMATE, directed by Roger Armstrong and John Hickman, is based on a short film made for the SFL 48hr Challenge and is a beautiful, raw, unflinching, nihilistic satire on twenty first century life – a tale of idiocy, delusion and obsession. LOVE AND SAUCERS, directed by Brad Abrahams, is a documentary exploring issues of time, space and fractured identity.

UNSPEAKABLE HORRORS: THE PLAN 9 CONSPIRACY, directed by Jose Prendes, is a docu-film focussed on Ed Wood who unleashed PLAN 9 FROM OUTER SPACE in 1959 to an audience not yet ready to look beyond the limitations of budget to what was really being said in the film. The film received a remarkable amount of backlash that, not only ruined many a career (including Eddie’s), but gained the film the unwanted prize of ‘Worst Movie Ever Made’. This film attempts to set the record straight by highlighting the unspeakable horrors that Ed Wood was trying to shed a light on with the help of some of the genre’s best and brightest inducing: Joe Dante, Mick Garris, Fred Olen Ray, Brian Yuzna, and Larry Kraszewski and Scott Alexander (who wrote Tim Burton’s ED WOOD), among many others. “Remember, my friend, future events such as these will affect you in the future” Criswell.

Other UK Premieres include: SPACE DETECTIVE directed by Antonio Llapur featuring galactic gangsters, interstellar visuals and an out of this world soundtrack and dry wit in vast amounts – this is not to be missed! DOMAIN about a deadly virus directed by Nathaniel Atcheson also celebrates its UK Premiere as well as THE FITZROY, directed by Andrew Harmer. The Fitzroy Hotel, set in a post-apocalyptic 1950s, is a derelict submarine beached just off Margate, and the last place for a traditional summer holiday. A joyous black comedy, think Basil Fawlty running the Crimson Tide.

THE END OF THE LONELY ISLAND directed by Ren Chao Wang from China is set against the backdrop of a deadly plague spreading across the Earth, the ‘Bi’an’ (“another shore”) project is humanity’s first interstellar exploration. The ‘Shenzhou 20’ starship has set off toward the Centaurus planetary system but now this scientific journey has become the last hope for human civilization. China is becoming known for producing effects-heavy action movies for the international market, but a few independent filmmakers are making superb high-concept science fiction, which is why we are excited to bring Ren Chao Wang’s début feature to the UK.

We are used to cameras everywhere, recording everything we do – what if they capture things our eyes cannot see? OCCUPANTS, directed byRuss Emanuel and starring Robert Picardo and Briana White has been a worldwide film festival hit. It’s a cutting edge and brilliantly performed thriller that puts a new twist on ‘found-footage’.

THE IMMIGRATION GAME, directed by Krystof Zlatnik is set in a Europe that has closed its borders to millions of refugees. Only Germany continues to offer citizenship if you compete and survive a new TV show called “Immigration Game”. The show is a manhunt through Berlin where every citizen can become a Hunter to track down refugees and stop them from winning their priceless German citizenship. In 2017 we are talking about immigration, wall-building and travel bans and the far-right being is called ‘populist’! The premise of this film could never happen right… Right?

Snowden, Assange, and even the Russians have ‘allegedly’ been putting leaked information online for a while now. When KAOS, a group of anonymous activists find some footage in a Snowden file that reveals the events surrounding the disappearance of four teenagers, they put it out there to try and get some answers. THE KAOS BRIEF, directed by JP Mandarino also celebrates its UK Premiere.

THE LAST SCOUT, directed by Simon Phillips, is ambitious and will appeal to old-school Sci-fi enthusiasts. It is also set in 2065 when Earth is rendered uninhabitable by war and humanity’s remaining survivors send a fleet of ships to different points in the galaxy in the hope of finding a new world.

DIVERGE, by US director James Morrison, follows the aftermath of a global pandemic when a survivor searches for ways to cure his wife of a deadly virus. In movie shorthand, you could use TWELVE MONKEYS meets PRIMER as a reference, as it deals with similar ideas and is brilliantly constructed on its modest budget, however it packs a feisty punch in the time-travel genre. Winner of the Siren Award for Best International Feature at the 2016 Lund Fantastic Film Festival.

MAGELLAN, directed by Rob York, follows seasoned astronaut Roger Nelson who is picked to pilot a mission that will challenge his skills and test the life he leaves behind. After NASA picks up a trio of mysterious signals from within our solar system, Nelson is dispatched on a multi-year trip aboard the Magellan spacecraft to investigate the sources. What he discovers will change our understanding of science and our place in the universe. Magellan delivers a credible high-concept science fiction. If they asked you, would you go?

For the full line up visit the website: sci-fi-london.com #SFL17 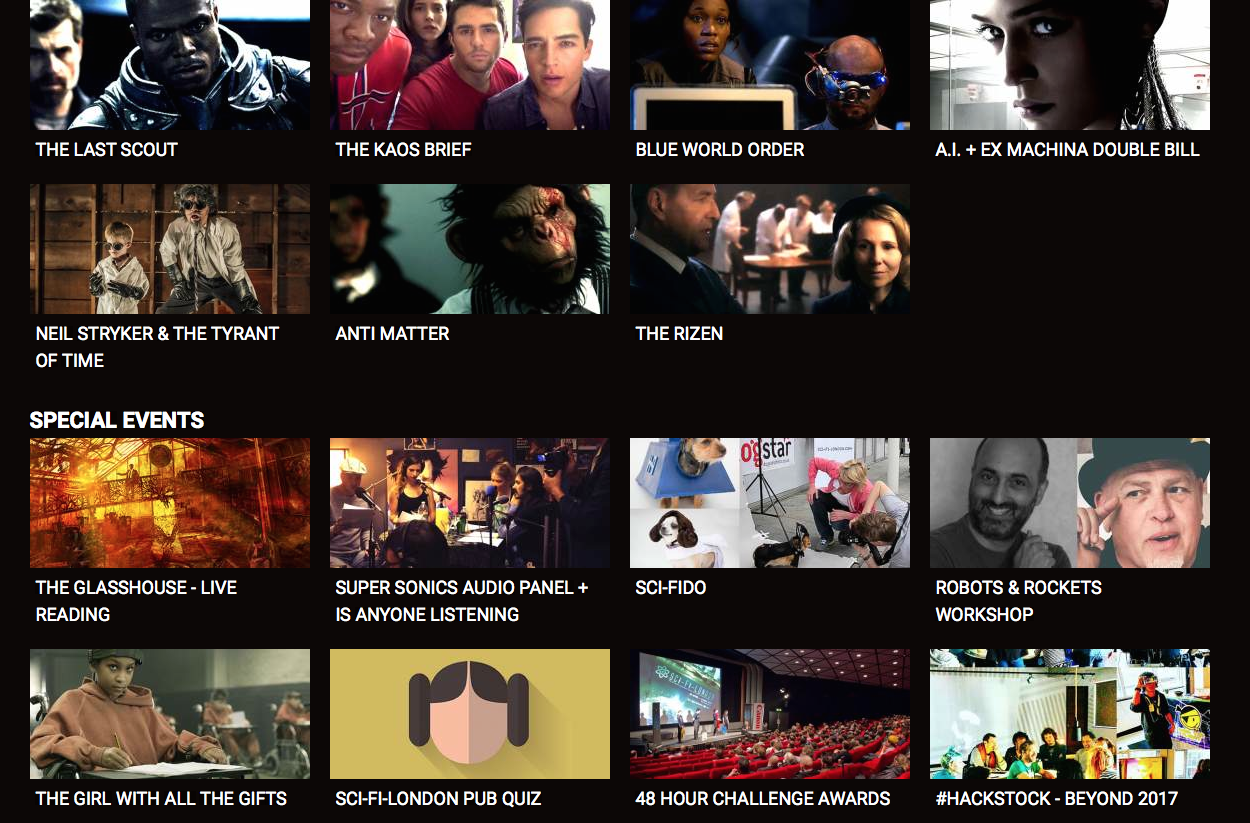 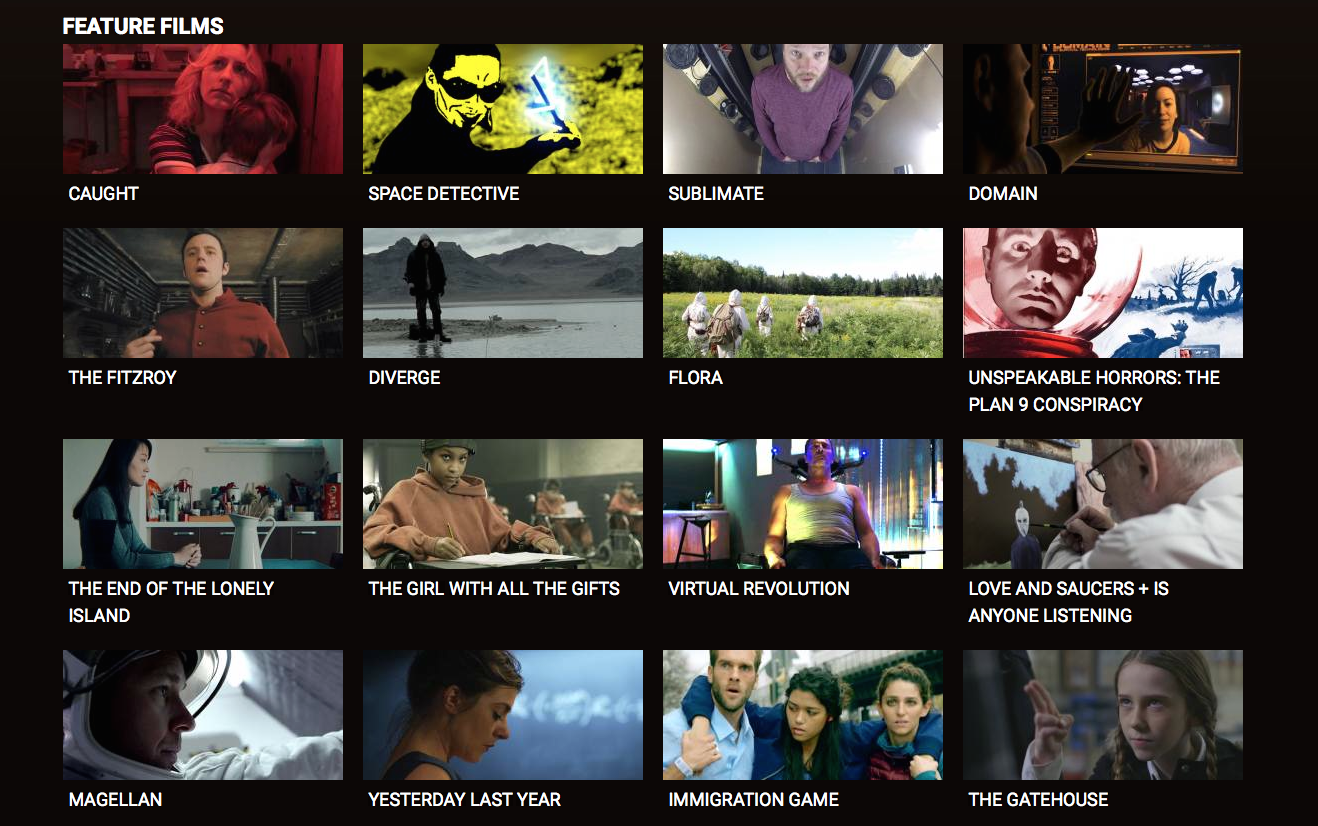