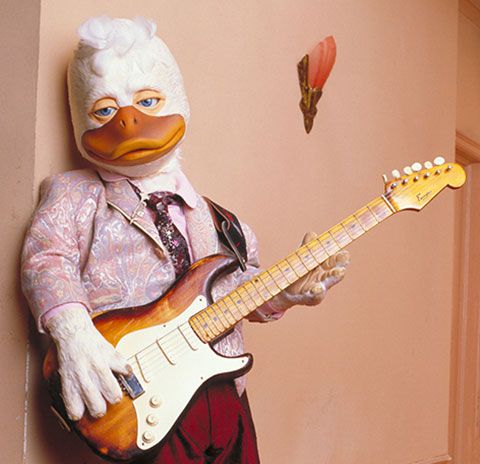 HOWARD – A NEW BREED OF HERO

What the duck was George Lucas thinking of when he decided to lavish $52 million on producing this truly awful movie about a duck from a distant duck planet who comes to earth for a series of distinctly underwhelming adventures? Now, I have nothing against ducks in general; Donald has always provided plenty of amusement over the years, and you can’t beat some nice crispy duck from the Chinese takeaway. It’s good with orange sauce too. But I do draw the line when it comes to films featuring dwarfs in obvious duck suits.

Based on a Marvel comic book, the film opens like 2001 with a bombastic John Barry score and epic style credits. Then we find ourselves on a Planet of the Ducks in a far-away universe, where all ducks can talk and all Chinese takeaways are banned.

Everyday cigar-smoking, beer drinking working duck Howard is relaxing in his living room on his recliner reading “Playduck” after a hard day doing whatever working ducks do, when suddenly the chair starts vibrating. No, it’s not because it came from the duck branch of Anne Summers. Before you know it Howard is yanked through space and deposited on earth. In Cleveland.

Once he has landed in an oil drum he sees big-haired Lea Thompson (Back To The Future) being attacked by a pair of thugs and uses his “Quack Fu” skills to save her. She’s the lead singer of an all-female punk band called The Cherry Bombs and doesn’t regard a talking duck as that much out of the ordinary, especially in Cleveland.  Taking Howard back to her place, a grateful Lea agrees to help him find a way back to Duckworld, a task that means enlisting the aid of goofy, baby-faced lab janitor Tim Robbins and eccentric nuclear scientist Dr. Jeffery Jones.

It seems that a giant laser developed by Jones went haywire and was responsible for Howard’s wild interstellar ride. Now all that he needs to do is reverse the laser and send Howard back where he came from. The sooner the better as far as we’re concerned. But a member of an alien race called The Dark Overlords of Evil also hitched a ride on the laser, and he craftily possesses Jones, who now feeds on electricity by plugging his tongue into a truck cigarette lighter. The rest of the movie sees Howard and Tim Robbins attempting to rescue Thomson after the evil alien has kidnapped her, and involves lots of explosions and car chases plus an endless number of truly lame duck jokes. At one point Howard is attacked by a diner chef who wants him on the menu. “I can’t believe this planet. Fried eggs – yuck!”

It doesn’t help that the central character is such an annoying little twerp – Howard the Dick might have been a more appropriate moniker. The script is excruciatingly bad throughout and even the action scenes are boring. The single most amazing thing about the movie though is how cheap it looks considering the vast amount of money spent. It has the feel of a mediocre TV movie and the pathetic special effects mark an all time low point for George Lucas’s own Industrial Light and Magic (ILM) team. The movie was nominated for seven Golden Raspberry Awards in 1986 including Worst Director (Willard Huyck), Worst Original Song (“Howard the Duck”) and Worst Supporting Actor (Tim Robbins). It won four Razzies, for Worst New Star (“the six guys and gals in the duck suit”), Worst Visual Effects, Worst Screenplay, and Worst Picture, which it tied with Prince’s Under the Cherry Moon.

One final thing. George Lucas apparently stated back in 1986 that in 20 years time he believed audiences would rediscover the movie as a masterpiece. Bad call on that one, George. But then it seems like par for the course for the man who thought Jar Jar Binks would gain a huge fan base.